Home Blog Who would you sue for a personal injury claim involving a driverless car?

Who would you sue for a personal injury claim involving a driverless car? 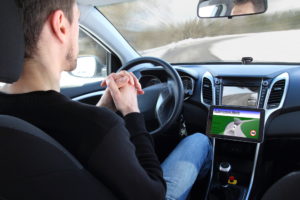 Driverless cars will be making their way to roads near you soon and they pose a massive headache for policy and law makers. One of the primary concerns is sure to be who’s to blame when a personal injury claim involves a driverless car?

As technology advances, our personal injury laws need to keep pace to cope with the new legal and ethical challenges that driverless cars will create.

If a driverless car causes a crash and people are hurt, then who should pay personal injury compensation? Is it the owner of the car, the person in the car at the time of the crash, the car’s manufacturer, or perhaps the creators of the algorithms controlling the car?

A recent policy paper published this month (November 2016) outlines the current recommendations for law reform relating to driverless cars as set out by the National Transport Commission (NTC). The NTC is an independent body that provides transport law reform recommendations to Commonwealth, State and Territory Governments.

In the policy paper the NTC outlines eight recommended actions for the near term during the testing phase, the medium term while cars will be partially automated but still require a driver, and long-term law reforms for when vehicles will be fully automated.

For the near term and the medium term, the paper essentially takes a wait and see approach, reaffirming that the ‘human driver remains in full legal control of a vehicle that is partially or conditionally automated, until a new position on liability is developed and agreed’.

For the longer term, it recommends that law reforms for fully automated driving systems should be taken in line with international developments and the ‘maturity’ and safety of the technology.

Roads will be safer: the US approach

In the US, the Department of Transport has taken the view that roads will ultimately be safer with automated vehicles, and so policy recommendations tread a fine line, balancing current safety concerns while trying not to impose too much regulation on manufacturers that may discourage innovation.

Earlier this year in September, the US Federal Department of Transport released its initial guidelines – a 15-point safety standard for driverless cars; a recommendation for uniform laws to govern driverless cars across the nation; and recommendations for how current and future laws may apply to automated vehicles.

It’s clear that policy makers see driverless cars as benefitting road safety in the future, but they also recognise that the current technology is still in development – so safety concerns need to be balanced against the need for continued innovation.

During the transition phase, the Australian approach of maintaining the status quo for personal injury claims makes sense – that is that liability will remain with the driver. But ultimately, as technology improves, safety concerns are addressed and humans are removed from the equation, the manufacturers of autonomous vehicles may well face liability for personal injury claims when things go wrong.