Still learning to drive: Understanding the risks for P-plate drivers 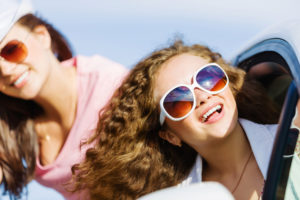 Parents of P-platers still have a role to play in the ongoing education of their older children. Research shows that P-plate drivers are involved in more crashes than any other group of drivers and they are most at risk during the first year of driving.

Parents are well placed to influence their children to help them adopt safe driving practices. P-plate drivers are inexperienced in how to handle high-risk driving conditions like driving at night, driving in wet weather, and driving on high speed roads.

There are a number of legal (and illegal) driving conditions that may be considered “high risk” for P-plate drivers. These include:

Once your children have finally passed the driving test and won their hard-earned P-Plates, it’s important for them to keep in mind that there are still driving restrictions on their licence.

P-Platers are banned from driving certain types of high performance cars, but there are also other restrictions to keep in mind.

Certain high performance cars are restricted for P-Platers for safety reasons. P-Platers (both P1 and P2) are not allowed to drive cars that have:

If you’re in any doubt, you can check the NSW government’s database of approved vehicles.

There are a number of other restrictions on P-Plate drivers including: