Home Blog "Skitching" skateboarder must share some responsibility for accident 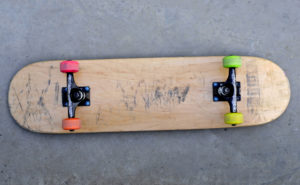 A 12-year old skateboarder who suffered serious brain injury has had his compensation payout reduced by 10% due to contributory negligence. The accident happened after he fell while “skitching” a ride up a hill by holding on to a moving car while riding his skateboard. The NSW Court of Appeal found that it was “just and equitable” that he should bear a small proportion of the responsibility for the damage due to lack of care for his own safety.

The boy, Schoupp, was sitting with two friends on the side of the road with their skateboards. When the father of another friend drove by and stopped, the boys convinced the adult driver, Verryt, to allow them to ride their skateboards up a hill while holding the back of his car. Once they started the ride, Schoupp began to wobble and fell backwards hitting his head on the road. He suffered a hairline fracture to his skull and “consequential damaging contrecoup contusions to the frontal lobes of his brain”.

In the compensation proceedings that ensued at the District Court, the primary judge awarded Schoutt with a total of $2.2m in damages. His Honour rejected the defence of contributory negligence and found that the boy’s lack of care “was totally eclipsed and overshadowed by the overwhelming negligence” of the adult driver. As a result, there was no reduction in the compensation payout.

At the Court of Appeal, Verrt appealed on two main grounds:

On the issue of contributory negligence, the Court of Appeal concluded that a reasonable 12 year old should have appreciated that the activity involved some danger and that Schoupp failed to look after his own safety, even though the adult driver was mostly responsible. As a result, overall damages were reduced by 10%.

“Nonetheless it is just and equitable that the respondent bears a small proportion of the responsibility for the damage resulting from the accident. A sufficient allowance for the respondent’s lack of care for his own safety is reflected in a reduction of his damages by 10%,” Meagher JA said [in 64].

On the issue of future economic loss, the Court of Appeal found that the allowance of $200,000 for buffer for lost chance of self employment was manifestly excessive and it was reduced to $25,000.

On the use of expert witnesses

An interesting aspect of the decision were the judicial comments on the admissibility of evidence from an expert witness, a psychiatrist. The court found that the questions Dr Quadrio was asked to consider did not require or involve any psychiatric assessment of the boy.

“Instead, the questions did no more than invite her to express views as to how she thought an ordinary boy of 12 was likely to have acted and thought in the circumstances in which the respondent found himself in January 2007. That subject was not one that her evidence showed to be a field of “specialised knowledge” in which she was expert by reason of her training, study or experience”, said Meagher JA at 51.

Meagher JA also quoted Transport Publishing Co PL v Literature Board of Review (1956) 99 CLR 111 per Dixon CJ, Kitti and Taylor JJ at 119 “… Ordinary human nature, that of people at large, is not a subject of proof by evidence, whether supposedly expert or not”, [in 57].

Sackville AJA agreed with Meagher JA and added the following warning to legal representatives on the use of expert evidence:

“Unless the opinion expressed in an “expert” report satisfies the requirements stated in s 79(1), the opinion is unlikely materially to assist the trier of fact in determining the factual issues arising in the litigation.”

“On the contrary, reliance on a report that does not satisfy the statutory criteria is likely to incur unnecessary costs and can lead to delays in bringing a case to trial.”

“It is for these reasons that legal representatives need to consider carefully whether an opinion elicited from an expert can be presented in a form that satisfies s 79(1) of the Evidence Act and, in any event, whether the opinion advances the client’s case.”

“Equally, the representatives of a party served with an inadmissible or irrelevant expert report should be astute to object in a timely fashion to the report being admitted into evidence.”

“Cases can and should be resolved justly and speedily without reliance on expert evidence of dubious utility.”