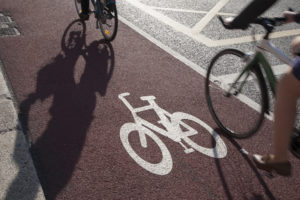 Cyclists will need to carry photo identification when they’re on the road if new proposals from the NSW government are made law.

According to a recent story in the Sydney Morning Herald, the changes to cycling laws will also include higher fines for cyclists caught breaking road rules.

Are these changes to cycling laws a good idea? What do you think?

While these changes may anger cyclists, they will be pleased to hear that the report also suggests that the NSW government is considering the introduction of laws requiring drivers to keep a safe distance when overtaking cyclists.

South Australia, Queensland and the ACT have all introduced the mandatory overtaking distance as part of their road rules. The Amy Gillett Foundation, a safe cycling advocacy group, recommends a minimum distance of 1m for roads with speed limits of 60 km/h or less, and 1.5m for roads with higher speed limits.

There are a number of reasons why introducing a similar law in NSW makes sense. First and foremost, the measure will improve cycling safety by reducing the risk of cyclists being side-swiped by cars and trucks. The mandatory one-metre passing distance for lower speed areas is a clear rule that is easily understood and enforced.

The Transport NSW proposal is for a dedicated lane for bicycles during peak hour, but it will be a shared zone with trucks and vans at other times. And the existing dedicated bike path on College Street will be removed.

Cyclist groups argue that forcing cyclists to share the lane with heavy traffic is dangerous and puts lives at risk.