Reducing the risk of P-plate car accidents: Mobile phones and other no-gos 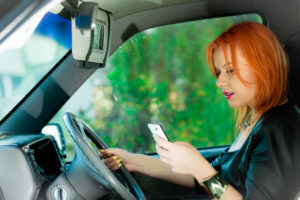 P-plate drivers are not allowed to use mobile phones while driving, even hands-free, after recent changes in NSW road rules aimed at reducing car accidents and fatalities.

At the end of last year, P2-plate drivers were included in the ban on mobile phone use along with P1-plate and Learner drivers. The ban includes holding a mobile phone while driving; using a mobile phone for GPS in a holder; and talking hands-free or in speaker mode. The rules came into force on 1 December 2016.

As drivers who are still learning, it’s no surprise that P-platers are involved in more car crashes than others behind the wheel. As a result, there are a number of other restrictions on P-plate drivers including rules on speeding, alcohol consumption, type of car, and number of passengers.

Speeding is one of the main contributing factors to car accidents and road fatalities. Lower speed limits are in place for P-plate and Learner drivers to help reduce these tragic events.

Learners and P1-platers have a maximum speed of 90 km/h, while P2 drivers are limited to a maximum of 100k/h. And of course, all drivers must observe the posted speed limits and default speed limits in urban areas.

No alcohol or drugs

Another major contributing factor to car crashes and fatalities is driving under the influence of alcohol and drugs. Learners, P1 and P2 drivers are expected to have nothing to drink prior to driving. And the same goes for illicit drugs, as for all drivers.

‘Muscle’ cars, those with large or modified engines, may be attractive to young drivers. But in an effort to reduce the number of car accidents on NSW roads, people who are still learning to drive shouldn’t be behind the wheel of these high-performance vehicles.

Learners and P-platers are not allowed to drive certain vehicles including cars with a power-to-tare mass ratio of greater than 130 kw per tonne. Also included in the ban are those with significant engine modification, or those listed by the roads authority as a restricted vehicle.

P1 drivers under the age of 25 may only take one passenger along for the ride between the hours of 11pm and 5am. And for both P1 and P2 drivers, if they’ve been disqualified for a driving offence, then once they are allowed to drive again, they may only take one passenger at any time for the first 12 months. Exemptions may apply for specific circumstances including employment conditions.

Other restrictions for P-platers include:

You can check the full range of restrictions for Learner and P-plate drivers on the NSW government road authority site at rms.nsw.gov.au.