Recent Slip and Fall and Other Public Liability Cases 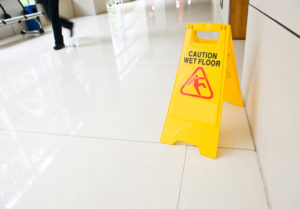 A worn mat was found to have caused a real estate agent to slip in Dilon v Hair, while a steep and slippery driveway caused injury to a visitor in Caruana v Darouti. See below for our latest round-up of slip and fall and other public liability cases.

In Dillon v Hair the NSW Court of Appeal confirmed that a real estate agent was entitled to damages for injuries suffered in a slip and fall accident. She had slipped on a worn mat placed by the property owner on a polished timber floor just inside the front door. The Court found that a reasonable person in the owner’s position would have inspected the condition of the underside of the mat, which had usually been kept outside exposed to sun and rain, and which would have revealed that it was likely that the rubber underside had substantially lost its slip-resistant properties.

In Caruana v Darouti, the NSW Court of Appeal confirmed that a visitor to a residential property who had slipped on a steep and slippery descending driveway was entitled to damages for a knee injury. Immediately after the fall, the owner had said to the visitor that “she’s sorry and that due to the rain the driveway is very slippery”. The Court found that the owner was under a duty to take precautions such as resealing the driveway so that the driveway was no longer slippery or had greater adhesiveness for people walking on it.

In Holroyd City Council v Zaiter, the NSW Court of Appeal confirmed that a 9 year old child was entitled to damages for personal injuries suffered when he rode a bicycle down a grassed slope and into a concrete drainage channel. The local council was fully aware of the risk of injury relating to its property. The relevant risk of injury was that a child would fall into an unfenced, two metre deep, concrete channel. The local council was clearly aware of the foreseeable risk of injury and was taking steps, albeit somewhat slowly, to do something about it; the thrust of its own documentary records was an awareness on its part of the existence of a real risk of injury to children unless something was done about fencing the channel.

Paid Housework Claim Fails Due to Lack of Proof

In ECS Group (Australia) Pty Ltd v Hobby, the NSW Court of Appeal heard an appeal from a District Court case where a woman had successfully obtained a damages verdict in relation to a slip and fall on a dance floor. She had attended an engagement function at hotel premises of which the appellant was the occupier and had proved negligence.

In the District Court the trial judge had awarded her damages for her alleged need for future paid commercial domestic assistance; at trial she had given evidence that her mother had been doing all her housework due to her injuries and that she would “prefer”, money permitting, that a commercially paid person carry out the housework rather than her mother.

The Court of Appeal held that her claim for future paid commercial assistance should fail because she had not proved that gratuitous domestic assistance (such as what her mother had been providing) would not be available in the future.