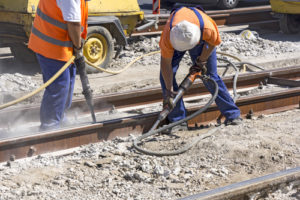 In a recent workers compensation case, a rail labourer was awarded more than $1M in compensation for a back injury suffered at work. The case shows that employers have a duty of care not only to implement safe systems at work, but also to ensure that they are followed.

If you’ve been injured due to unsafe practices at work, our friendly team at NSW Compensation Lawyers can help you get the compensation you need.

The labourer, Mr Donald, was employed to carry out maintenance work that included the replacement of railway sleepers. His employer was a labour hire company, Staff Innovations Pty Ltd, and the work was carried out for the Rail Corporation of New South Wales (Rail Corp).

The worker alleged that in the course of his employment he suffered a serious back injury because of the heavy labour that he was required to undertake. In particular, he claimed that he was forced to operate a jackhammer continuously when his co-worker refused to take on that job.

Mr Donald received workers compensation payments for his injuries and commenced a personal injury claim against both the labour hire firm and Rail Corp.

Employers’ duty of care to provide a safe system of work

In this case, Rail Corp argued that it did have a safety system in place. The labourers were required to work in teams of two so that they could alternate on jobs and they were allowed to take a 5–20 minute break after using the jackhammer during which time other tasks could be carried out.

However, the worker alleged that because this system wasn’t enforced, the employer had breached its duty of care.

When the case came to the NSW Supreme Court, there were three main issues at stake:

What the Court said

Liability for workers compensation was assessed at 90 per cent for Rail Corp and 10 per cent for the labour hire company. The reason for this was because the main responsibility for the injury lay with Rail Corp as it had the greatest control over the work conditions. The injury happened in Rail Corp’s workplace, with equipment it provided, under a system of work it controlled and supervised.

What this workers compensation case means for employers and employees

This case is significant because it shows that employers’ responsibilities are twofold: not just to put systems in place to keep workers safe, but also to make sure that safety measures are followed.

It also shows that the Court will apportion the majority of damages to the employer who is in most control of the situation – in this case it was Rail Corp, despite the fact that the worker’s direct employer was the labour hire company.