Home Blog Pedestrian at worst? Who’s to blame when pedestrians get injured?

Pedestrian at worst? Who’s to blame when pedestrians get injured? 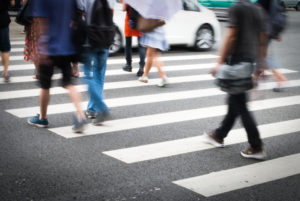 Who is to blame when a pedestrian is injured by a motor vehicle – the driver or the pedestrian?

It’s easy to think that drivers have a greater responsibility for the welfare of pedestrians given pedestrians have the right of way.

However, in NSW the Court’s attitude to pedestrian safety seems to be that it is a shared responsibility.

Last year, a NSW Court of Appeal decision appeared to represent a shift in the court’s attitude to pedestrian responsibility finding that the conduct of drivers should not be judged against a higher standard than that of pedestrians.

The Court’s decision is important because it is a move away from treating drivers of a “lethal” motor vehicle, who are able to cause greater damage than pedestrians, as bearing a greater responsibility in collisions.

In T & X Company Pty Ltd v Chivas [2014] NSWCA 235, the NSW Court of Appeal considered a case involving a pedestrian being struck by a taxi in Sydney’s CBD.

The 6th of October 2008 was a public holiday. Traffic in the city of Sydney was light. At 12.50pm, a taxi was being driven in a westerly direction down Market Street, Sydney. The taxi driver had a green light permitting him to cross George Street.

As he approached the intersection, two young men ran across Market Street from the north-western kerb (to his right and on the far side of George Street), ignoring the red pedestrian light. They passed in front of his taxi. He did not slow down.

As the taxi crossed George Street, a third young man ran onto Market Street and was fatally injured when hit by the taxi.

The Court of Appeal held that the weighty factor in assessing relative responsibility for the accident was the unpredictable step taken by the deceased pedestrian in seeking to cross the road against a red pedestrian light and in the face of oncoming traffic.

It increased the deceased pedestrian’s responsibility for the collision from 40% to 75%.

Interestingly, the Court noted the fact that the deceased pedestrian suffered from Asberger’s Syndrome and he may have in some way been unable to judge the behaviour of other road users however this issue was not dealt with by either party in the lower Court.