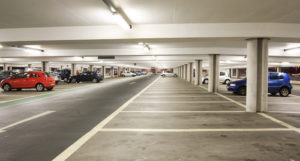 In a recent decision, the District Court of NSW has turned down a shopper’s personal injury claim for injuries sustained after tripping over a concrete kerb in an underground car park. The Court decided that the hazard was an obvious risk.

Lawyers experienced in personal injury claims can help you determine whether you have a case if you’ve recently been injured.

Mrs Fedaa Shinnaoui was walking through the underground car park of the Campbelltown Mall when she became distracted by another shopper whose trolley hit Mrs Shinnaoui’s car. Distressed, Mrs Shinnaoui failed to notice a concrete kerb and tripped over it, suffering injuries to her left shoulder and right knee.

She commenced a personal injury compensation claim in the District Court against the owner of the shopping mall, Perron Investment Pty Ltd, and the managing agent, Jones Lang Lasalle (NSW) Pty Ltd.

One of the first issues that the Court considered in the personal injury compensation claim
was whether the risk of tripping over the concrete kerb was an ‘obvious risk’. Under the Civil Liability Act 2002 (CL Act), if a risk is something that would be obvious to a ‘reasonable person’ then the defendants would be under no obligation to warn customers of the danger.

The primary judge found that Mrs Shinnaoui had visited the car park on a number of occasions preceding the accident and therefore would have been familiar with the layout of the car park, including where the concrete kerbs were located.

The judge found that the kerb did indeed constitute an obvious risk – the only reason Mrs Shinnaoui failed to see the kerb was because she was distracted by the shopping trolley hitting her vehicle.

Were the defendants negligent?

The judge also found that the lighting of the car park had nothing to do with the accident. And although the concrete kerb could have used an extra coat of paint, the failure to refresh the painted surface didn’t amount to negligence on the part of the defendants. In these circumstances the judge found that the defendants were not liable for Mrs Shinnaoui’s personal injury.

Why was this case significant?

The case showed that in situations where the injured person is in a familiar situation, then they need to take reasonable care for their safety when faced with ‘obvious risks’.

This case can be contrasted with a decision of the Court of Appeal where a shopper was awarded more than $90,000 as compensation for her injuries after slipping on a grape at a Coles supermarket. In that case, it was similarly argued that the grapes on the floor were an ‘obvious risk’ in the personal injury compensation claim. However, while the presence of the grapes on the floor were not found to be an ‘obvious risk’, in this case the shopper’s familiarity with the layout of the car park counted heavily against her case.