Ho, ho, ho? No, no, no! Christmas parties, personal injury and employers’ liability 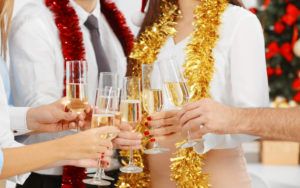 As the end of the year draws near, businesses are winding down for the holidays and everyone is looking forward to that final Christmas bash. It’s a time to have fun with your colleagues and celebrate all the hard work you’ve done through the year together. But sometimes parties can get out of hand, and people can be injured, bullied or harassed.

Employers’ liability extends outside the office

For employers, their liability for personal injury and inappropriate behaviour can extend beyond the usual office environment.

They still have a duty of care to ensure the safety and wellbeing of employees at work functions, and that includes off-site end-of-year parties.

Workers compensation and the Christmas party

If you’re injured at your work Christmas party, then you may be able to make a claim for workers compensation depending upon the severity of your injuries. For a workers compensation claim to be successful, the personal injury needs to be shown to have occurred in the course of employment.

In recent years there have been a number of successful claims for injuries where a connection has been made with injuries at off-site work functions – see, for example, Hatzimanolis v ANI Corporation Ltd [1992] HCA 21. In this case a worker was injured on a car trip while he was working in a remote location.

In another case where a successful workers compensation claim was made, a woman was injured by a light fitting while staying at a motel room on a work trip – see Comcare v PVYM [2012] FCAFC 181.

However, there have been times when a workers compensation claim wasn’t successful, especially when the injuries were caused by employees who were acting illegally or indulging in risky behaviour.

Also once the work function ends and the party moves on to other venues, then the employer may no longer be liable if things go wrong and someone is injured.

Beyond personal injury, employers are also held responsible if people are subjected to sexual harassment, discrimination or bullying at an end-of-year work event. Employers can be found to be vicariously liable for the misbehaviour of employees in these situations.

In a recent case of sexual harassment, an employer was found vicariously liable when one employee raped another after a work dinner party (see Lee v Smith & Ors [2007] FMCA 59). The victim was awarded $400,000 as compensation.

Speak with a compensation lawyer

If you’ve been injured or suffered harassment at a work function, it makes sense to speak to a compensation lawyer who can give you advice on your rights and what might be an appropriate course of action.