Cyclists and car dooring – the personal injury risk is real 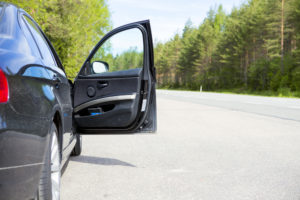 Car doors being opened in the path of cyclists poses a major personal injury risk. It’s up to both drivers and cyclists to be aware of the danger and to take precautions to ensure that serious accidents don’t occur.

What is the risk to cyclists?

Cycling has become an increasingly popular way to commute to work, with people recognising the health benefits that cycling brings. It is also an eco-friendly mode of transport and helps to reduce the congestion of car traffic on our roads.

However, one of the risks that cyclists face on their daily commute is running into a car door that is opened in their path. ‘Car dooring’, as it’s commonly known, poses a major personal injury risk, leading to serious injuries. There is also a further risk that the rider may be knocked off their bike into the path of oncoming traffic. If you have suffered injuries as the result of car dooring, lawyers experienced in personal injury cases could help you get just compensation.

In NSW, almost 6 per cent of all injuries to cyclists in 2006 and 2010 were a result of car dooring. In Victoria, the numbers were higher, at 8 per cent during 2007 and 2011. And in the Melbourne CBD, the numbers increased even further to a sobering 20 per cent of all cyclists’ injuries.

What can be done to reduce the risk of personal injury?

There are a number of ways that the risk of car dooring can be reduced. A recent report produced by a Victorian government committee looking at the issue breaks these options down into the following three categories:

Infrastructure changes involve designing our roads to make them safer and minimising personal injury risk for all road users including cyclists. Engineering options to reduce the risk of car dooring can be effective, but also come with a high price tag. Some of these include:

Enforcement of the existing rules protecting cyclists and increasing penalties may be another way to improve the situation and lessen personal injury, but its effectiveness in changing existing attitudes and behaviour is uncertain. Possible measures include:

Education campaigns raising awareness of the risk of car dooring is another piece of the puzzle to help reduce its dangers, especially in the CBDs of major cities. Measures may include:

What can you do if you’ve been injured by car dooring?

It’s clear that car dooring poses a significant risk of personal injury for cyclists. But, as a cyclist, what can you do if you’re injured by a car door opened in your path? At the time of the accident, first look to your own safety and the safety of others. If you can, get the details of the person at fault for the dooring, including their name, licence plate, insurance details and contact information.

Speak to a senior lawyer

To get the best advice on what to do, be sure to contact an experienced lawyer who can advise you best on your options to seek compensation for your personal injuries. Our friendly team at NSW Compensation Lawyers are always available to help you out and give you the advice you need. You can contact us here.