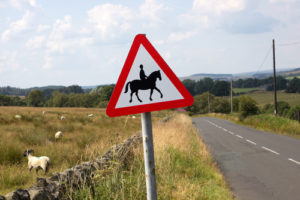 In a recent motor accident decision, the NSW Court of Appeal upheld an appeal against a claim made for horse riding injuries when he fell from his horse. The rider claimed that a motorist’s car spooked his horse, causing the fall.

However, the Court found that causation for the horse riding accident was not proved and that the rider’s injuries weren’t caused by a ‘motor accident’ as defined by the Motor Accidents Compensation Act 1999 (NSW) (the Act).

The case highlights the importance of consulting an experienced motor accident lawyer in circumstances where the very definition of what a ‘motor accident’ is may be called into question.

The horse riding accident occurred when Mr Hobbs fell from his appropriately named horse, ‘Buck’. He sustained injuries from the fall. At the time, he was riding Buck along a road in Wagga Wagga when a car driven by Ms Fairall passed in the opposite direction. Mr Hobbs alleged that Ms Fairall’s car caused his horse to shy and rear which resulted in his horse riding injuries.

Mr Hobbs commenced proceedings in the District Court of NSW claiming damages for the horse riding accident against Ms Fairall. In the alternative, he argued that his injuries were caused by a ‘blameless accident’.

Ms Fairall denied negligence and both parties agreed that the case turned on the speed of her vehicle at the time of the motor accident and its proximity to the horse.

After delivering an oral judgment over four days, the primary judge found in favour of Mr Hobbs, awarding him $339,242.40 after reducing damages by 30% due to contributory negligence.

In a unanimous decision, the NSW Court of Appeal decided in favour of Ms Fairall’s appeal. The court ruled that the evidence in the case did not support a finding that Ms Fairall’s vehicle was the cause of the horse riding accident and therefore Mr Hobbs’ injuries could not be said to have been caused by a motor vehicle as defined in s 3 of the Act.

The Court of Appeal also found that the primary judge failed to adequately address Ms Fairall’s duty of care and the issue of causation as required by ss 5B and 5D of the CLA.

Another aspect of this decision was the Court of Appeal’s criticism of the primary judge’s decision to deliver the judgment orally for 17 hours over four days. Most decisions of this sort are handed down in written form. McColl A/P criticised the primary judge for this, noting that it was contrary to the requirements under the Civil Procedure Act for the ‘quick and cheap’ disposition of proceedings.

What this case means

The importance of this case is it shows that a motor vehicle must play a significant causal role in a person’s injuries to make a claim under the Act.

Personal injury claims can be very complex and you need to get the best advice to make a successful claim.

If you’re ever injured in a motor vehicle accident, be sure to contact our experienced team at NSW Compensation Lawyers who can help you get the compensation you need to rebuild your life.