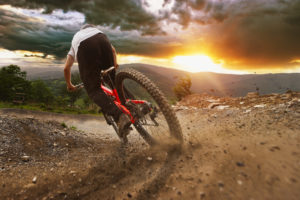 The NSW Court of Appeal has allowed an appeal against a cyclist’s car accident claim, finding that the trial judge did not give enough weight to evidence gathered around the time of the accident.

The decision shows the important role of so-called “contemporaneous evidence” – evidence gathered at the time of the accident and soon afterwards – in evaluating conflicting accounts of what occurred at the time of a car accident.

Cyclist claims he was hit from behind in car accident

Mr Cordin was riding a mountain bike alone on a dirt road in Nightcap National Park near Lismore. He fell off his bike and suffered severe injuries to his head and other parts of his body.

There were no witnesses to the accident, however two motorists found the injured man at the scene. Soon after, Mr Cordin’s wife arrived followed by paramedics. They treated Mr Corbin for his injuries on the spot, then took him to Lismore Hospital. Later that night, Mr Corbin was flown to Brisbane where he received medical treatment at the Princess Alexandra Hospital.

Afterwards, Mr Cordin made a statement to the police claiming that he was hit from behind by a motor vehicle. However, the car that caused the accident was never found.

When it came time to lodge a claim for his injuries, Mr Cordin lodged his personal injury claim against the Nominal Defendant, given that the driver of the vehicle couldn’t be identified.

The Nominal Defendant is a statutory body created by the government to allow for car accident claims to be made when the driver at fault is unidentified. This is allowable under s 34 of the Motor Accidents Compensation Act 1999 (NSW).

At the trial, the Nominal Defendant attacked Mr Cordin’s account of what happened, pointing to documents created close to the time of the accident that had no reference to a car causing the accident.

These documents merely reported that Mr Cordin was injured when he fell off his bike while riding down the dirt road. The only exception was Mr Cordin’s statement to the police where he claimed that he was struck from behind by an unknown vehicle.

However, after hearing all the evidence, the primary judge accepted Mr Cordin’s account of the accident and found in favour. He was awarded $350,000 in compensation for injuries resulting from the car accident.

At the Court of Appeal, the trial judge’s decision was overturned in favour of the Nominal Defendant.

The majority found that the judge failed to properly take into consideration all the contemporaneous documents, in particular those records created by doctors at the Princess Alexandra Hospital.

The Court went on to say that the judge’s approach to the contemporaneous evidence resulted either in the reversal of the onus of proof that Mr Cordin had to prove the involvement of another vehicle, or “was an inappropriate way of treating the evidence”.

Why this case is important

The case shows the importance that is placed on contemporaneous records in personal injury cases, including who creates them, why they are created, and their timeliness.

Speak to an experienced lawyer

If you’re ever injured in a car accident, it’s important to speak to an experienced lawyer as soon as you can to make sure you get the proper advice. Our friendly team of lawyers at NSW Compensation Lawyers can be contacted here.