Car accidents in NSW: mobile use remains a risk 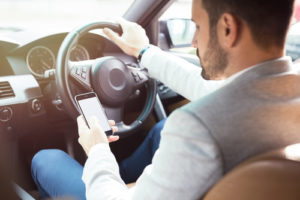 Mobile phones are a major cause of car accidents in NSW due to driver distraction. But despite the government’s recent awareness campaigns, the message is still not being received by drivers in the state.

According to a recent survey, more than half of all NSW drivers admit to handling their mobile phones while driving (57 per cent, while the national average was 55 per cent). The survey was carried out for the Australian Road Safety Foundation and Bob Jane T-Marts, as reported recently by the Herald Sun.

Drivers in the ACT and Victoria were the worst offenders with nearly two thirds of Victorian drivers admitted to handling their mobiles while driving (62 per cent), and in the ACT the number was even higher at an alarming 82 per cent of drivers.

According to crash data cited by the NSW Centre for Road Safety, mobile phone use by drivers was a contributing factor to 236 road accidents in NSW from 2010 to 2014. Seven of these accidents resulted in fatalities and people were injured in 116 crashes.

However, the NSW Centre for Road Safety suggests that mobile phone use by drivers could be a larger problem. The difficulty of proving mobiles were involved in car accidents in NSW means they could be to blame for many more accidents than recorded. This hypothesis is supported by a telling statistic that more than 35,300 fines were issued from July 2014 to June 2015 for mobile phone use by NSW drivers.

What the law says

The NSW state government has recognised the serious risk of driver distraction caused by mobile phone use and legislation has been introduced in an effort to reduce road accidents in NSW. Drivers are not allowed to handle their mobile phones while driving and if caught they face the loss of four demerit points and a $319 fine.

But drivers on an unrestricted licence are still allowed to use their mobiles hands-free to listen to music, take calls and for navigation. This means that the phone must be stored in an approved cradle fixed to your vehicle, or if it can be operated hands free using bluetooth or voice activation. However, drivers are still not allowed to email, text, use social media or send video messages.

And learners and P-platers (P1 and P2) are not allowed to use mobile phones at all after changes to the road rules at the end of last year.

The rules apply even when drivers are waiting at a stop light or crawling at a snail’s pace in heavy traffic. Mobiles can only be used if the car is parked and away from traffic.

Talk to a senior lawyer for car accidents in NSW