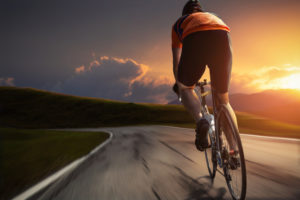 In NSW, bikes are considered a vehicle and so cyclists are required to obey the road rules like other road users – and those that flout the law risk not only run the risk of fines, but also causing serious bicycle accidents.

This includes things like stopping at red lights, obeying give way signs and using hand signals to indicate a change in direction.

But there are some rules that are specific to cyclists. Do you know what they are? Here are some of the main ones:

Helmets are compulsory for all cyclists – they must be approved helmets and correctly fitted. They must also have bell or horn and at least one brake.

If you’re riding at night then you’re bike must have:

Riding abreast: Cyclists are allowed to ride two abreast, provided that they are no more than 1.5 m apart.

Overtaking: Cyclists may overtake on the left hand side of stopped or slow moving vehicles.

Footpaths: Cyclists are not allowed to ride on a footpath unless:

Roundabouts: Cyclists may turn right from the left lane of a multi-lane roundabout provided that they give way to traffic exiting the roundabout.

For more information on safe biking, you can download the NSW government’s A Handbook for Bicycle Riders here.