Home Blog An animal wanders onto the road. What happens next?

An animal wanders onto the road. What happens next? 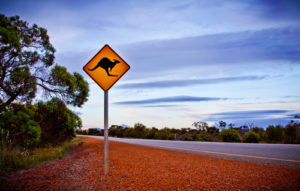 Animals on the road are a common cause of car accidents, especially when the driver swerves to avoid hitting one. It’s a natural reaction, but a sudden swerve can result in a collision with another car, a telegraph pole or a pedestrian, resulting in death or serious injury.

In New South Wales, researchers have found that around 500 animal road accidents occur each year. More than half of these car accidents with animals involve kangaroos and wallabies, with smaller numbers caused by wombats, dogs, deer, cats, cattle and other animals. Thousands of people are injured as a result, and in a recent ten-year period, about 22 people died as a result of such incidents.

If you’re injured in an accident caused by animals, you should find out if you’re entitled to compensation.

The motor accidents compensation system makes provision for accidents where it cannot be established if the driver or other person was at fault, for example, if a driver loses control of a car when they unexpectedly have a heart attack.

A single-vehicle accident that occurs when a car hits an animal on the road, or swerves to avoid an animal, may also be considered a blameless accident under some circumstances.

However, this is not necessarily always the case. In some instances, the judge has upheld that the collision would not have happened had the driver not swerved to avoid hitting the animal that ran in front of the car. Therefore, the driver’s response in swerving was the main cause of the accident.

In other cases of animal road accidents, it may be considered that the driver had been driving too fast, or had not been sufficiently vigilant in keeping an eye out for animals on the road.

In our first motor vehicle accident case study, the incident occurred when a dog ran out in front of a taxi. The driver tried to avoid the dog, but as a consequence, ran into the back of a parked truck.

In another case, a motorcycle rider was knocked off his bike when a large kangaroo jumped onto him from the side of the road. The injured motorcyclist brought an action for damages against the owner of the motorbike and the owner’s compulsory third-party insurer.

The motorbike rider argued that the blameless accident provisions of the law applied to the circumstances of his accident.

In the first instance, the court agreed with this position. The judge held that the primary cause of the accident was that the kangaroo had jumped out when it did, rather than any act or omission of the rider’s.

However, the decision was reversed by the Court of Appeal which found that the blameless accident laws could not be applied to an owner of a vehicle who was not involved in the accident in any meaningful way. The owner needed to be linked to the use of or operation of the vehicle at the time of the accident.

In a third case, a horse rider failed to win compensation for his injuries after claiming that a motorist’s car spooked his horse, which caused him to fall. The horse rider brought proceedings in the District Court against the motorist, as well as arguing in the alternative that it was a ‘blameless accident’.

The horse rider was at first successful, but the judge’s ruling was overturned by the Court of Appeal. The appeal judges found that causation was not proved and that the horse rider’s injuries weren’t caused by a ‘motor accident’ as defined by NSW compensation laws. The case shows that a motor vehicle must play an important causal role in an accident to allow a successful claim for compensation.

If you’re involved in a road accident with an animal, it’s vital to seek advice from an experienced legal professional as soon as possible. The application of the blameless accident provisions of the motor accidents compensation scheme, is a difficult area.

Establishing that a driver was not at fault presents considerable challenges in some cases, so the support of a lawyer specialised in car accident claims will give you the best chance of a favourable outcome.

If you have been injured in a motor vehicle accident and want advice on making a compensation claim, call our friendly team at NSW Compensation Lawyers on 02 9601 0088.