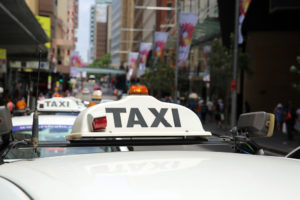 If you’ve been injured in a car accident, you can find yourself confronted with a range of new challenges you weren’t prepared for – dealing with the shock, pain and injury, sorting out the issues that come with a disruption to your normal routine, and making sure the accident is reported to police within 28 days. You may also be thinking about whether you can claim compensation to cover the cost of your medical treatment and any lost income.

When an accident occurs that is slightly out of the ordinary, such as when it involves a taxi, you may be even more confused about what your entitlements are.

Examples where a taxi is involved in accidents include if you were a passenger in a taxi that hit another car, a cyclist or pedestrian hit by a taxi, or driving another vehicle involved in a collision with a taxi. No matter what the nature of the accident, you’re probably still left questioning whether you’re still entitled to compensation.

The short answer is: yes, your entitlement to accident compensation is the same, regardless of whether a taxi was involved. In New South Wales, all registered vehicles must have compulsory third party (CTP) insurance, including taxis.

That means, if you were injured in the accident and not at fault, you should be able to claim compensation for your medical expenses and loss of income incurred.

Compensation for pain and suffering may also be available, if your injury resulted in permanent impairment assessed at more than 10 per cent of ‘whole person impairment’ – this is the extent to which your injury affects your ability to use any part, system or function of your body, and the effect this has had on your life, work and other activities.

In the event that you were at fault or partly at fault in the accident, you may still be entitled to a reduced amount of compensation. Your entitlement depends on the particular circumstances of the accident, the seriousness of your injury and its effect on your life.

People are also sometimes injured when getting in or out of taxis. Fingers get caught in doors or you may bump your head while unloading luggage. In this case, if no other vehicle was involved and the taxi was stationary, compensation for the injury will not be covered by the taxi operator’s CTP insurance, but should be available through their general liability insurance.

Whether a taxi was involved in the accident or not, the first thing you should always do is make sure that anyone injured gets medical attention. It’s also very important to swap details with the drivers of other vehicles involved. Make a note of the number plates and, if you have a camera, take photos of the vehicles and their relative positions before they’re moved off the road. It’s also a good idea to record the surrounding locations including street signs and other relevant things such as skid marks on the road.

If a taxi driver was involved in the accident, get the driver’s name and licence number, as well as the name of the taxi company. You should also ask to see the insurance policy that all taxis must carry, and make a note of the details.

Call the police immediately if anyone is killed or injured, if a driver appears to be under the influence of alcohol or another drug, if a driver refuses to provide details such as name and licence number, or if a vehicle has to be towed away from the scene.

Talk to a lawyer

There are strict time limits to when you can claim compensation for personal injury, so if your injury is serious and likely to have a significant impact on your life, call a lawyer as soon as you can.

A lawyer with the right knowledge and expertise can help establish whether you have a case for compensation and make sure the full impact of your injuries is taken into account. Sound legal advice will also help guide you through the process of complying with all the procedural requirements.

Though compensation may not solve all your problems, it certainly can alleviate some of the pressure an accident or injury can induce. Advice from an experienced legal team can provide support that could be vital when dealing with insurance companies and ensure you the best outcome.